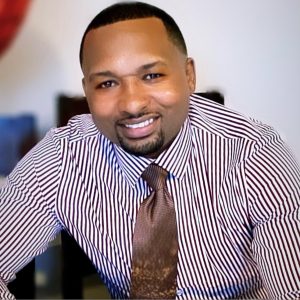 Dante Clark, A native of Los Angeles, California, became involved with the entertainment industry at the early age of 16.

He began his journey in the industry with the R&B quartet 3rd Storee. The group landed a vast recording contract with Edmonds Entertainment (Kenneth “BabyFace” Edmonds/Tracey Edmonds) and Elektra Records.

The group earned notable successes across the states and abroad, sharing the stage with some of music’s biggest acts, such as USHER, *NSYNC, BRITTANY SPEARS, and the BACKSTREET BOYS.

Dante has over 20 years of experience in the entertainment business. His ability to breathe creativity and life into projects landed him projects with industry leaders such as VH-1, FOX, A&E, and Bravo. Beyond his creative prowess, Dante has consistently submitted to God’s divine purpose for his life by paying it forward and has continually strived to remain on this path.

He completed the board governance program with AABLI (African American Board Leadership Institute) at Loyola Law School, Los Angeles.

In 2020 he was appointed to the Empowerment Congress Central Neighborhood Council by Mayor Eric Garcetti (Los Angeles), where he also serves as Chairman of the bylaws committee.

He has received certificates of recognition from Mayors and State Senators for his civic work in Los Angeles. He received the “key to the city” of New Orleans, Louisiana, for his philanthropy work with children and young adults, given by Mayor Marc H. Moral.

Dante has worked closely with Challenger Boys and Girls Club and the YMCA (Los Angeles) to create programs for youth development and student academic achievement.

Dante is widely sought-after for his keen advice and consultancy, which has landed him at the tables of prestige clergypersons and entertainment executives.