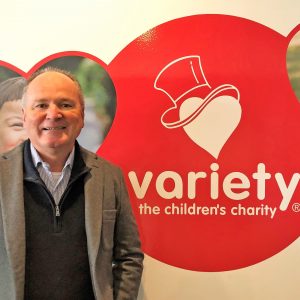 Aiming to tick off a bucket list adventure piloting a pre 1970’s car around the Australian outback, and with little knowledge of where the money he was raising would go, David entered and fund rose for the 1992 Variety “Heart to Heart” Bash motoring event.

Along the Bash route David witnessed the money raised delivering assistance to kids who were sick, experiencing disadvantage or living with a disability.  As a father of three young children, he began to volunteer for Variety in other areas, as well as continuing to fundraise and enter a team each year in the Variety B to B Bash.

An invitation from Variety International to be Executive Director was accepted in late 2013.  Before the birth of his first grandchild saw David return to Australia at the end of 2018, David was privileged to, and thoroughly enjoyed, working with the 40 Chapters in 11 countries.

On his return to Australia, David was fortunate to join Variety Australia, an association of the seven Australian Variety chapters as Executive Director, a position he continues to hold.  David maintained his involvement with Variety International via committee and volunteer work.

David joined the Variety International Board in 2022 as Chair of the Variety Asia Pacific Regional Council.

Prior to Variety, David owned two manufacturing, import and distribution businesses in the consumer electronics market, before selling them to a publicly listed CE business.  He is married with 3 grown children and two grandchildren.  Outside of work, David holds his pilot’s license and enjoys travel, music and cars.