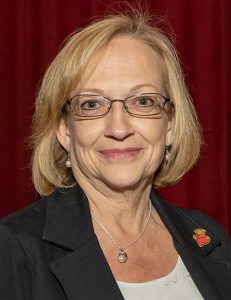 Nancy started her career in entertainment by working at the local AMC movie theatre – selling popcorn, tickets and then managing the team.

While attending college she moved with AMC Theatres to Los Angeles to help open the west coast office to work closely with movie studios. After 13 years at AMC, half on the West Coast, and completing her college degree, Nancy joined The Walt Disney Company as a marketing coordinator, rising to Vice President, Exhibitor Relations in 6 years and working there for more than 24 years.

In this capacity, she developed new strategic marketing campaigns with key stakeholders to drive box-office success – from trailer programming to build-your-own grassroots marketing resulting in 90% participation in many of the programs.

Joined 2656 Marketing – a boutique marketing firm – after leaving Disney becoming partner in 18 months. In this new role Nancy works with partners to strategize on growing the business, developing new customer relationships, and meeting the needs of clients. While beginning her career at Disney she was asked to join the board of Variety – the Children’s Charity of So. California to help rebuild the organization.

This soon became her passion as she developed and managed the Gold Heart fundraiser including expanding pin sales across the US and licensing the first pin using studio intellectual property (Mickey arm & wand). Thru 3 separate campaigns successfully raised over $4 million for the charity. Became President of Variety So. Cal for 2 years where she set strategy and goals including the establishment of a legacy fund, instituted policies and revised bylaws to meet today’s standards including term limits.

Nancy also serves as Director for the Will Rogers Motion Pictures Pioneer Foundation. She helped bring Variety and Will Rogers together to deliver critical medical equipment to neo-natal units at hospitals resulting in the program “Brave Beginnings” at Will Rogers.