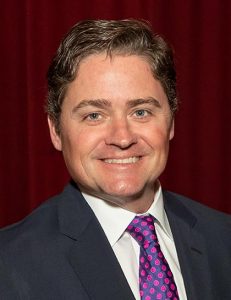 Stan W. began his professional career in insurance in 1996. He started in the underwriting training program at CIGNA Property & Casualty in Philadelphia, PA. Upon completing the one year program, Stan W. then went to work for CIGNA’s business development division as an internal marketing consultant working with McKinsey Consulting New York, NY. After CIGNA Property & Casualty was purchased by ACE Insurance in 1999 Stan W. then joined Reynolds & Reynolds Inc. in Des Moines, Iowa. Stan W. is President of the movie theatre division. His insurance program is endorsed by the National Association of Theatre Owners (NATO) currently doing business with over 40% of the movie theatres in the United States.

Stan W.’s life outside of work includes the following boards and family life.

Stan W. is married to his wife Laura and has two children, Caroline age 9 and John Henry age 7. Stan W. currently lives in West Des Moines, Iowa. He served 3 years in The US ARMY Infantry from 1989-1992 at Fort Benning, Georgia and Baumholder, Germany. He has a B.S. in Political Science from the University of Utah.