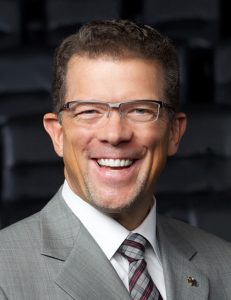 A 46-year motion picture theatre industry veteran, the last 32 of which being (and continues) with Cinemark Theatres, the 3rd largest exhibitor in both the US and globally. As Executive Vice-President of global theatre operations, assisted in the opening of each of Cinemark’s offices and initial theatres in Latin America, Japan, Taiwan, England and Canada. Currently, Cinemark has well over 525 complexes in 16 countries. In 2007, after spending a decade exclusively with duties outside of the USA, he returned to head up USA Operations, taking the ‘then’ Gold Hearts sales from $80,000/year to the highwater mark of $1.2mm with the Minions pin.

Steve is also a member of multiple committees for the theatre trade association NATO (National Association of Theatre Owners) including the Advisory Board, Diversity and Inclusion, and chairing the Conventions Committee, working closely with NATO President John Fithian and CinemaCon Executive Director Mitch Neuhauser.

He has worked with varying charities in varying capacities over the years – including with the North Texas chapter of the American Diabetes Association, as well as The American Cancer Society’s N. Tx chapter of the CEOs Against Cancer. Steve was named Texan of the Year by Tent 17 (Variety – The Children’s Charity of Texas) in 2016, and during the gala celebration, raised ~$460,000. He has served on Tent 17’s board for 4 years and was elected Chairman of the Board in the fall of 2019.

He holds Political Science and Economics degrees from Colorado State University, has been a cohort advisor for varying MBA teams from Univ of Chicago – Booth, University of Pennsylvania – Wharton, and guest lecturer at Univ of Denver – Daniels. He and his wife Sue have 3 adult children, and 2 (+) grandchildren, “and feeling unimaginably fortunate that all are well – but having an elder sister that is ‘developmentally challenged’ – has a life-long appreciation for families that struggle for the Whole family to ‘fit in’ to society – and a dedication to the Mission of Variety.”